Often, there is an opportunity to build out street systems as part of a new development. This would include any greenfield situation, and many infill projects where large blocks of land (industrial, big-box retail, freeway teardown, or even the reassembly of small parcels of land) are rebuilt. In any of these situations, it is a relatively easy matter to adopt Traditional City design principles where they are appropriate, in particular an abundance of Narrow Streets for People, combined with a smaller amount of Arterials and Grand Boulevards. In practice, these Narrow Streets for People may be “private streets,” functioning as streets but within the context of a single privately-owned piece of land, and thus not under the jurisdiction of a municipality. This is common in mobile-home communities, probably some gated townhouse community kinds of situations, outdoor shopping centers, amusements parks, ski resorts that include condos, and so forth.

Also, there are often existing streets that are basically in the Narrow Streets for People format, of less than forty feet wide, but which would benefit greatly from a rebuild or other such improvement. This includes many “alleys,” and also many streets in cities in Europe or Latin America, which are not very wide, but are in an Arterial format of segregated central roadway/sidewalks, or are perhaps dominated by onstreet parking.

However, in many other cases, the situation does not allow for creation of whole new streets, and also, the existing streets may be of typical 19th Century Hypertrophism width of 80 feet or more from building to building. It does not take too long to figure out that you can’t really “narrow” a street, as you can’t move the buildings closer together. So, you have to deal with what you have.

My point today is that there are a great many things that you can do to improve these kinds of situations. And, they are genuine improvements. So, go ahead and do it. However, we should nevertheless recognize that these improvements are small-scale tweaks on a fundamentally flawed design, not new ideal forms in themselves.

Among various Arterial Hacks, we have two basic categories:

If a street is Arterial in function, as a major throughway for motor vehicles, then it should probably remain so. We will need some such streets. But, there are many streets that are Arterial in form (large central roadway for dedicated vehicle use, often onstreet parking, and sidewalks) but not Arterial in function, such as a typical suburban residential street.

Things in this category can also serve as models for Arterial streets in new development as well. Quite a lot of attention is being paid these days to Arterial upgrades, with the use of segregated bike lanes, BRT lanes, removal of onstreet parking, “complete streets” etc. so we won’t spend much time on this today.

Among Type 1 hacks, we have:

Center roadway infill. This proposal uses the center roadway for building infill. Existing sidewalks (10-15 feet wide) become two Narrow Streets for People on either side. This looks to me like it could create rather good outcomes. The problem is that it is very dramatic, very permanent, and also must have the support (at some level) of existing property owners on that street. Thus, I find that it is a solution that would require a lot of confidence — confidence in a good outcome. I think there might be a lot of this at some point, but probably not in the “first wave.” Rather, after being proven over hundreds or even thousands of successful examples of “blank slate” developments, people might be more willing to accept it in these existing situations.

One problem of this is that the center roadway is typically not quite wide enough. True, there are some Arterials with very wide roadways; but these are probably also Arterial in function (lots of traffic), and not appropriate for an infill project. Street spacing in dense Traditional City neighborhoods is commonly around 100 feet between streets. This allows two 50-foot-deep plots. However, the available space in these situations might be more like 40-60 feet. That suggests either very small 30-foot-deep plots–which certainly can be done, and would allow very small but affordable townhouse-type plots of perhaps 20×30 feet. A larger apartment building, however, might make more sense with the full 60-foot width, which would then have street access on two sides. All in all, these can still lead to quite favorable outcomes.

Selling off the central roadway to developers would obviously generate a lot of revenue. One way to get the support of existing landowners on the street would be to give them some of that revenue. Think about the potential selling price of acres of prime urban land in a place like San Francisco. If existing property owners could get 50% of that revenue, do you think they might agree to it? I think you could get at least 50% support if something like that were offered, enough to greenlight the project.

Despite the somewhat dramatic nature of center-roadway infill, it is an idea that is widely shared enough that I think it could get a surprisingly high level of support. So, perhaps we will see some developments here before too long.

Pedestrian conversion. A lot of pedestrian conversions seem to have happened in China. The street was probably a Arterial in its original design, 80 feet or more from building to building, but was later rebuilt with one flat paved surface from one end to the other. Motor vehicles are rare, mostly for things like deliveries and pickups, and probably banned during most of the day. 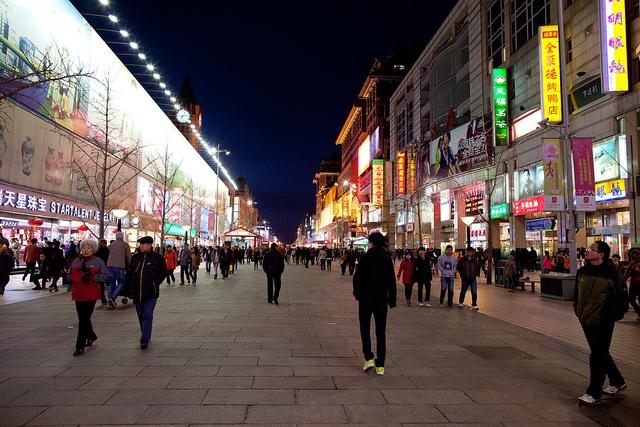 This can create a decent result. However, the width is very, very wide for a street for pedestrian use only. The result is something of a barren, empty effect unless there are literally thousands and thousands of people there. Only a few places can be the kind of major destination that can attract these kinds of crowds. So, it is not a solution that can be applied to very many places, basically just some limited examples in major city centers.

Another possibility is to fill in the area with something. Outdoor restaurant seating, or some kind of outdoor market, can fill in large Arterial-size areas, leaving what amounts to a Narrow Street for People of perhaps 15 feet wide. This is fine — if you have an abundance of restaurants with outdoor seating, which is probably only feasible in a few downtown locations. 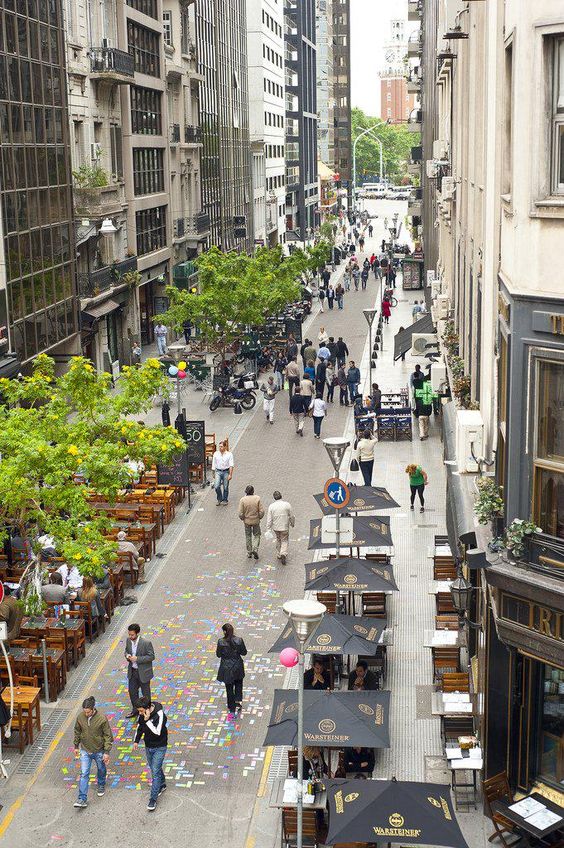 Recent Arterial converison that uses most of the available space as restaurant seating, leaving an effective Narrow Street for People of about 15 feet wide. Buenos Aires, Argentina.

One possibility is to bisect the area longitudinally, creating what feels something like two narrower streets side-by-side. 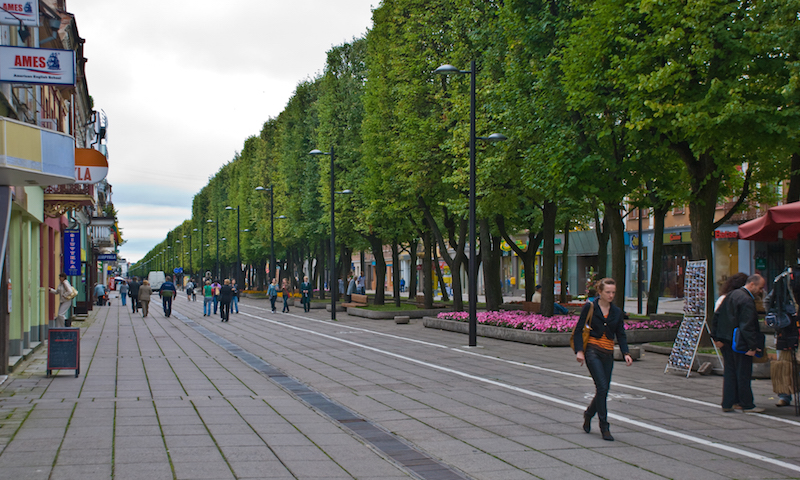 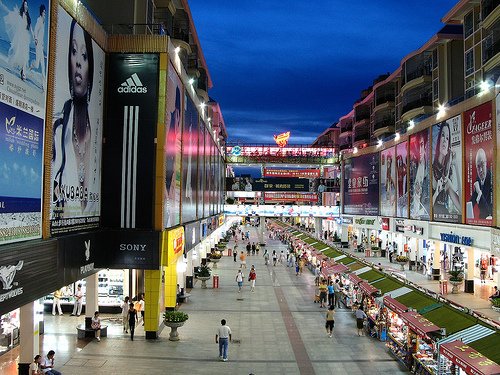 “Shared streets.” Some people seem to be attracted to the idea that a street can be “shared” between motor vehicles and people on foot. This is very common in the Narrow Streets for People format, of widths typically of less than 25 feet from building to building. This is possible because the narrow width tends to dramatically slow down vehicle speeds to under 10 miles per hour; and also, because streets of this size typically have little traffic to begin with, as there is no reason to drive on such a small street unless it is your final destination. Vehicles would rather stick with Arterials. 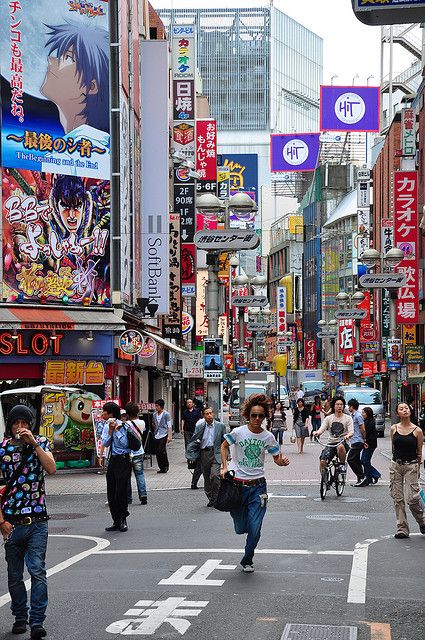 Cars and people getting along together. Ginza district, Tokyo, Japan. 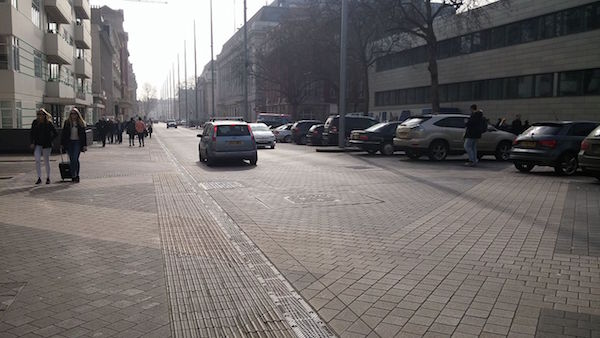 Using this format in a larger, Arterial-size space tends to cause confusion and conflict between vehicles and pedestrians. In the larger, emptier space, vehicles naturally drive a little faster. If vehicle speeds rise from 10 miles per hour to even 15 mph, that can cause a distinct feeling of threat and danger to people walking. The natural conclusion is that vehicles and people should be separated, which of course returns us to the Arterial form even if perhaps with the use of bollards or planters rather than curbs. Also, the large, open space naturally attracts more vehicle traffic, as it seems like the street is more appropriate for vehicle use.

“Shared streets” that are not Narrow Streets for People (under 25 feet in width) generally do not work well, and are not recommended.

To these three common solutions, I would add a few more suggestions:

Park conversion. This would use the street space as something like a park. There would still have to be a street, as buildings will need some kind of street access. However, it might be a Narrow strip of pavement, of perhaps 10 or 15 feet wide. This could leave 60 feet or more of width. The first impulse would be to put the street in the middle, with two narrow strips of greenery on each side. This is the typical format of the “Arterial with green buffer,” which is common worldwide. However, a better solution might be to put the street on one side, which would allow all 60 feet (for example) to be used as something like a park.

So basically, with an 80 foot ROW, you could have: 15 feet Narrow Street for People format; 60 feet “park”; 5 feet sidewalk along opposite side. This might be particularly welcome in 19th Century Hypertrophism residential examples, such as a street of New York City townhouses, where residents might enjoy the new “park” right in front of their door.

Square conversion. The very large widths that result when Arterial-size streets are “pedestrianized” are not appropriate for pedestrian use alone. However, they are common for urban squares. The difference with a “square” is that it is roughly square; in other words, a defined and contained space, not something endlessly long like a street. Thus, one thing to do with a converted Arterial is to segregate it latitudinally (across the street) into a series of squares, using something to enclose the space. This could be done with cheap/removable barriers like potted trees, perhaps some kind of temporary or removable structure ranging from street-vendor tents to food trucks to some other kind of prefab structure, or perhaps with long-term construction.

The main point today is that, as people want to experiment with Traditional City design principles to make better Places for People in existing cities, they will naturally look for solutions for existing Arterial roadway-type situations. There is nothing wrong with this. However, these “Arterial hacks” should not be used as templates for new construction, where street width, design and layout can be defined from scratch. In that case, use Traditional City forms: Narrow Streets for People, Arterials, and Grand Boulevards.