Let’s Take a Trip to Tokyo

I was in Tokyo for two weeks in early September. What a city! I lived there for several years before, and each time I return it is always much better in real life than even my fond memories. In my experience, in terms of overall fabulousness, Tokyo is several grades above any other city I have been in, including New York, San Francisco, Los Angeles, Seattle, Paris, Milan, London, Singapore, Hong Kong, Taipei, Bangkok, Shanghai, and a few others. This is true even though Tokyo, for the most part, lacks the antiquarian charm of Florence or Venice. Tokyo was largely destroyed in an earthquake and fire in 1923, and again during the carpet-bombing of World War II. Thus, pretty much everything you see has been built since 1950, and sometimes built twice or three times over. Our own experience in the U.S., and in most places in the world, is that most anything built after World War II stinks. Compare the crappy concrete boxes of 1950s London from the grand architecture of the 19th century, for example, or the marvels of central Florence from the mediocre (but tolerable) post-war construction that surrounds it.

Actually, Tokyo architecture from the 1950s and 1960s also consists mostly of crappy concrete boxes. In the 1980s-present, the boxes got a lot less crappy, and there are many wonderful examples of modern architecture, but they are still basically concrete boxes. After the earthquakes and fires and bombings, Japanese people like building their homes out of steel-reinforced concrete. So, what makes Tokyo wonderful is generally not “architecture”, but rather City Design — and, of course, many Really Narrow Streets. We in the U.S. are used to pretty things from before 1940, and a bunch of automobile slum shite afterwards. This leads to a certain sort of despair, as the experience, repeated over and over, is that nothing new is worth a crap. The result is a sort of overall resistance to “development” in general. Everyone in the U.S. is running toward nature … but they need to work … so they live in the suburbs, which is exactly the problem they are trying to escape. Tokyo is a good example of a very successful contemporary development. That’s probably why it is also about the largest city in the world, with a population of about 36 million. It’s a place that people want to go to, not get away from. Look closely. Nothing here is all that hard to make. It must be said, however, that the traditional pre-1940 Japanese architecture was also very lovely, if unfortunately made mostly of wood. I wouldn’t mind more of that. 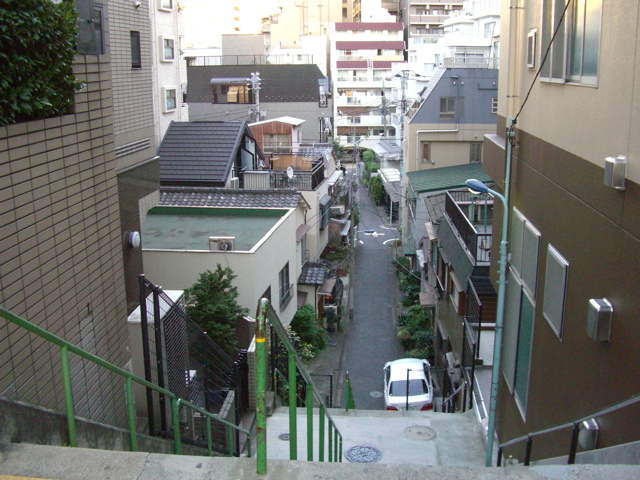 A view looking down the stairs from Yushima Tenjin shrine, near Ueno station. A lot of Tokyo looks like this. Multistory (but not high-rise, 3-10 floors generally), Really Narrow Streets, no automobile traffic. It’s not really a postcard shot, but there is a tremendous amount of interesting stuff when you walk around on street level. Hmmm–multistory (but not high-rise), Really Narrow Streets, no automobile traffic, pedestrian paradise. That sounds a lot like Florence, no? Precisely my point. If you have these basic ingredients, you will have a wonderful result, even if you build a bunch of concrete boxes. 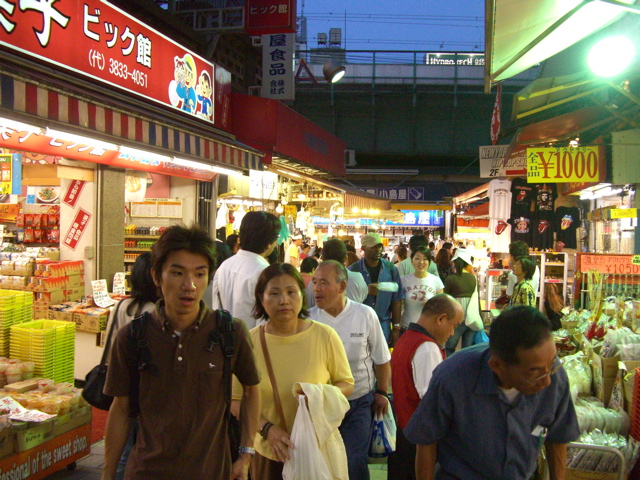 A little part of the Ameyoko shopping area, near Ueno station. This is a typical “shopping street” — though narrower than usual — of which there are many hundreds throughout the city. Looks like fun, no? It IS fun! The green bridge in back is the Yamanote train line, one of the busiest train tracks in Tokyo. This is an outdoor street, not an indoor mall. Where are the cars???? 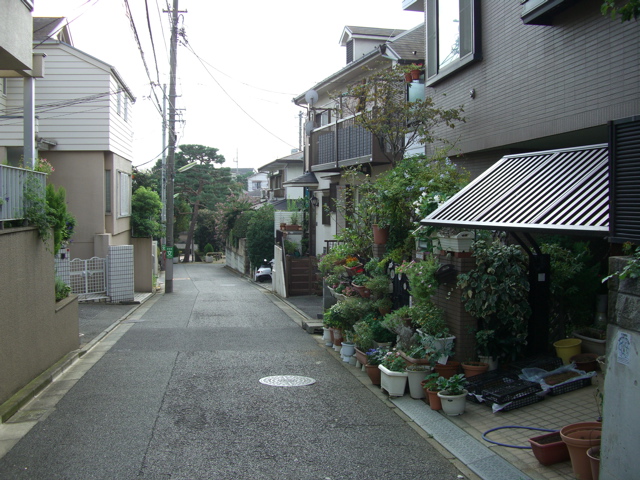 This is a nice residential neighborhood a litte west of Meiji Jingu shrine. Still very much central Tokyo. The streets are, of course, Really Narrow. Note plenty of greenery and NO CARS. I used to jog through these areas regularly. My typical course was from Toritsu Daigaku to Shinjuku Station, about five miles up the west side of Tokyo. It was pretty much all neighborhoods like this. I used to run right down the middle of the street. It was great jogging! It boggles people’s minds when I tell them that 90% of the streets in Tokyo have almost no traffic at all. This is not a suburb, by the way. This is quite close to the city center. Shinjuku station, the end of my jogging course, is the busiest train station in the world. 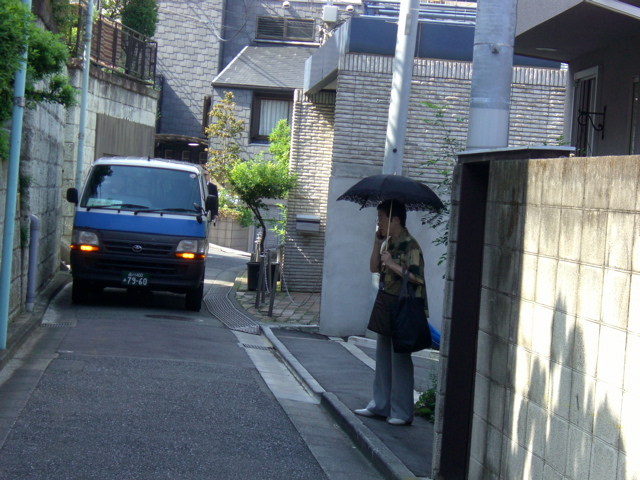 You can see here why there is so little traffic. Driving is a bitch! Walking, however, is pure pleasure. If your streets are not Really Narrow, you will have an automobile traffic problem. (There are some wide avenues for cars and trucks, which are of course quite crowded.) 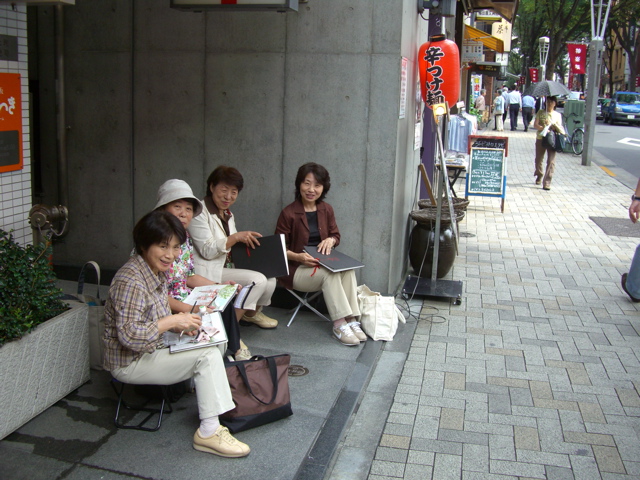 This is the Kagurazaka street, in the absolute center of Tokyo — only a short walk from the Emperor’s Palace. Nice place with lots of stuff going on. These women are a drawing club. They are preparing to draw the scenery of Kagurazaka street. Is there any street in your neighborhood that is worth drawing? 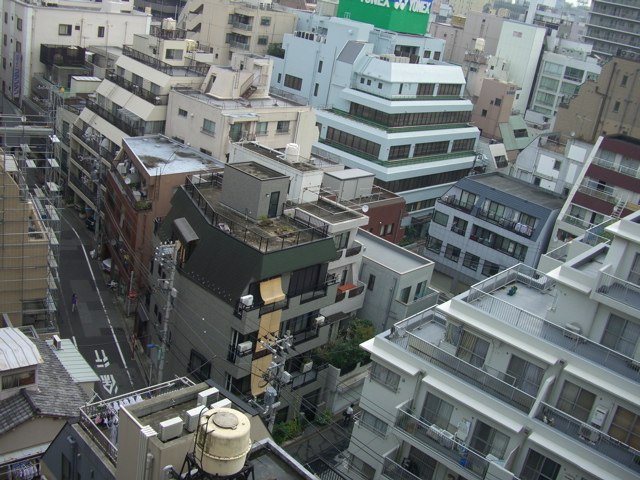 This is the Yushima neighborhood, near Ueno station. Typical Tokyo stuff. Note that the street on the left is Really Narrow, has no traffic, and there’s a pedestrian walking right down the middle of the road. Not very picturesque perhaps, but this is a fabulous neighborhood with a wealth of interesting shops, restaurants, businesses etc. Tennis fans — that teal building toward the top is the world headquarters of Yonex, the racquet manufacturer. I remember using a Yonex raquet when I was in high school. 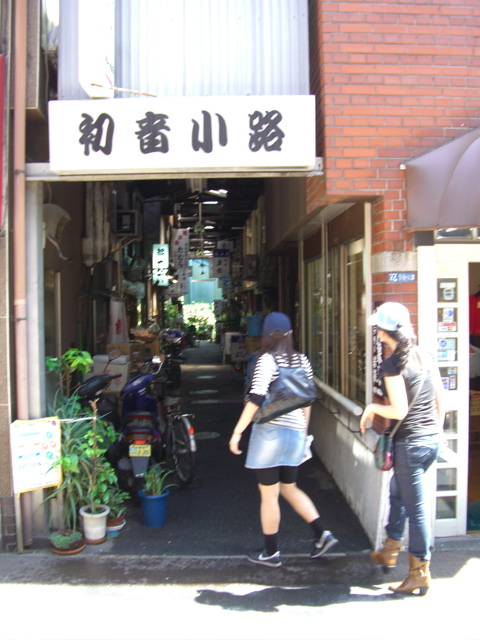 A Really, Really, Really Narrow Street, in the Yanaka neighborhood a little north of Ueno. It’s full of interesting little shops, including about half a dozen restaurants and bars, each of which seat 6-10 people. 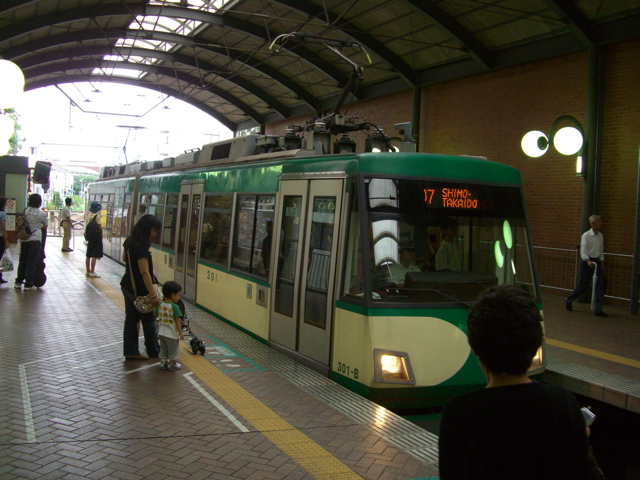 This is a train station for the Setagaya Line, which is a tiny train line that begins at Sangenchaya (“Three Tea Houses”). I used to jog past this station all the time. This time, I rode the train. Notice that it only has two cars. This is an exception, of course. 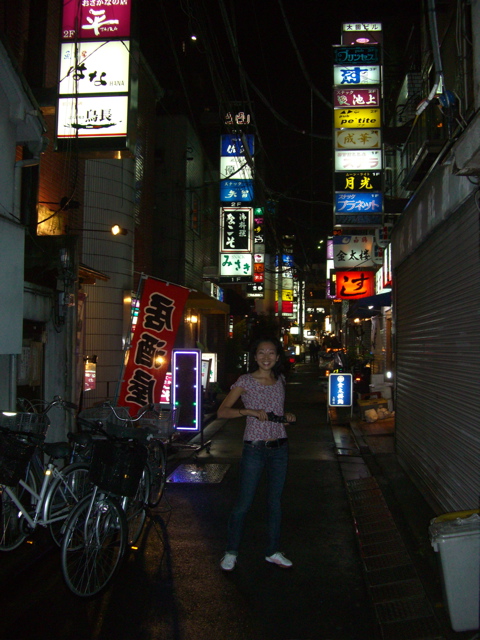 This is a street of small restaurants, clubs and places to drink near Ueno station, in the Yushima neighborhood. There are dozens of streets like this in this neighborhood, and dozens of neighborhoods like this. Each one of those little signs is another bar/club/restaurant. You could go to a new one every week for the rest of your life, all within a five-minute walk. Need I point out that the street is Really Narrow and that there are NO CARS? 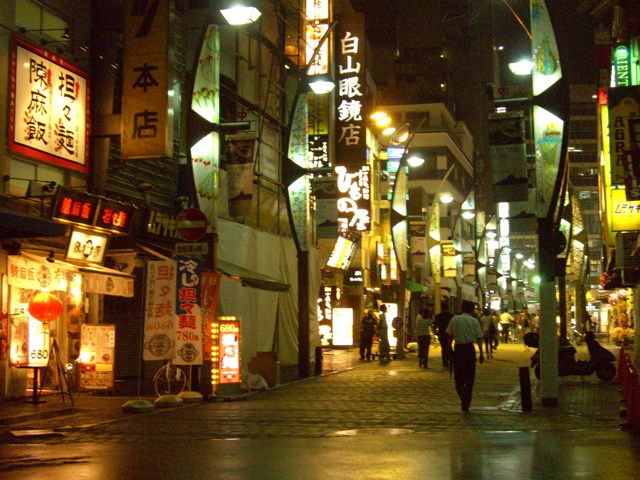 It’s Friday night and time to go have some fun! One little corner of the Ameyoko area, near Ueno station. Where are the CARS? 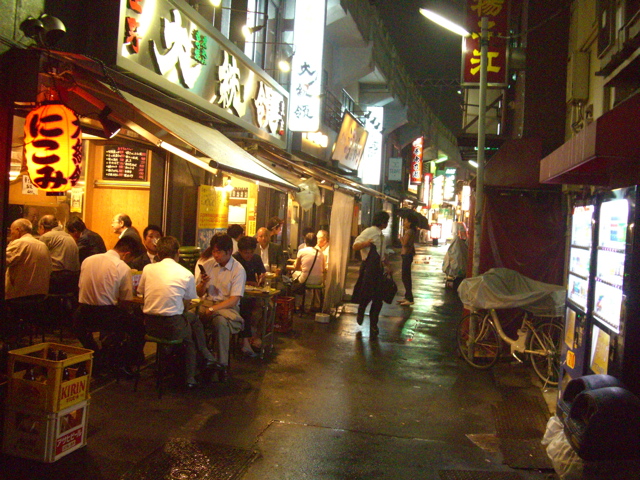 Major score! We found this “postwar” style yakitori restaurant under the train tracks in Ameyoko. (You can see the train tracks up above, on concrete pillars.) Super-duper “Showa” style. I think we prefer Showa style to Heisei style. Even the name was fabulous. “Daitoryo,” which means “President.” Who names a restaurant “President”? 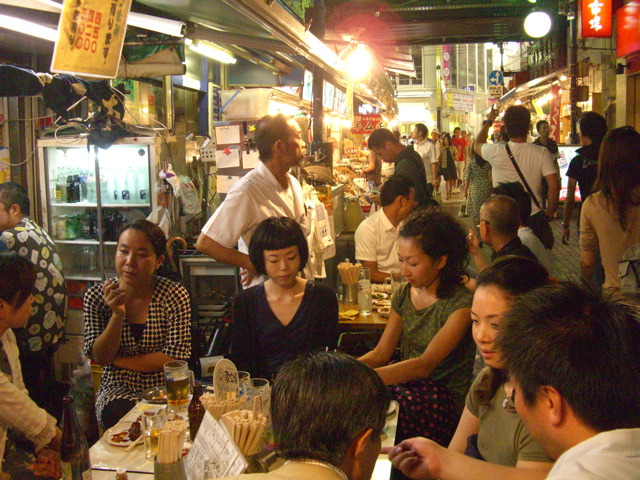 Another night at Daitoryo! Great yakitori, super scenery, all washed down by a lot of shochu mixed with fresh squeezed lemon juice. (Another first for me, but not the last!) 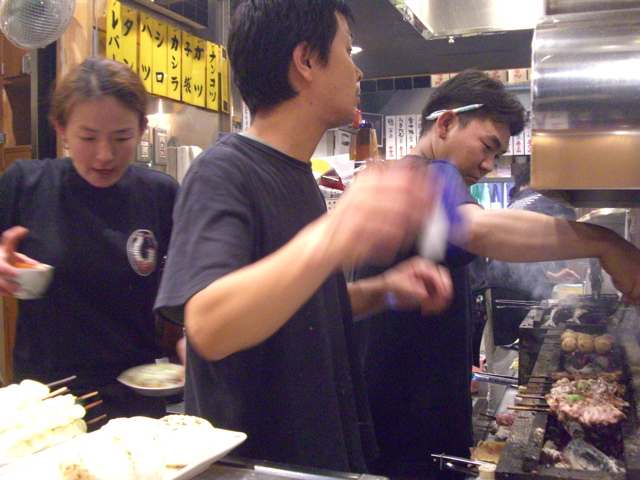 Cooking up the goodies at Daitoryo. I’m focusing on this one restaurant not only because it was great fun, but to make a point. When I say that “each one of those dozens and dozens of signs is a bar, club or restaurant,” it means that each one is something like this. (Maybe not quite so busy.) 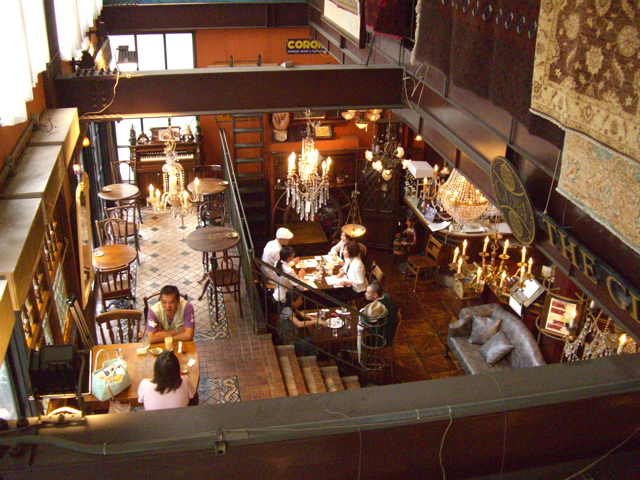 A cafe/antiques store called the Globe, in the Mishuku neighborhood near Naka-Meguro. For a while, I lived about a five minute walk from here, and often came by for coffee. 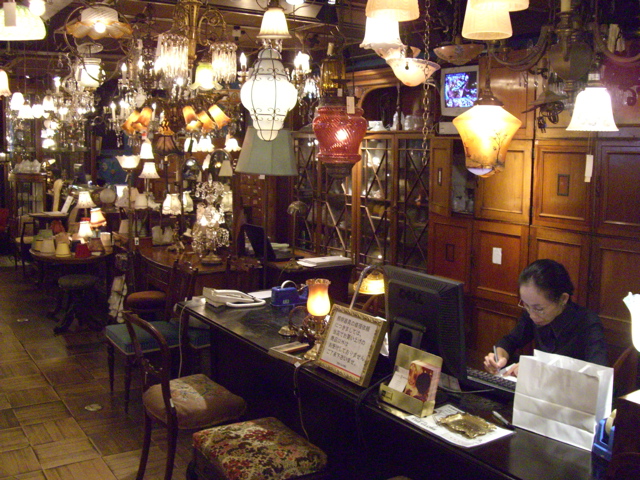 When you’re done with your coffee, you can shop for antique lights on the second floor. 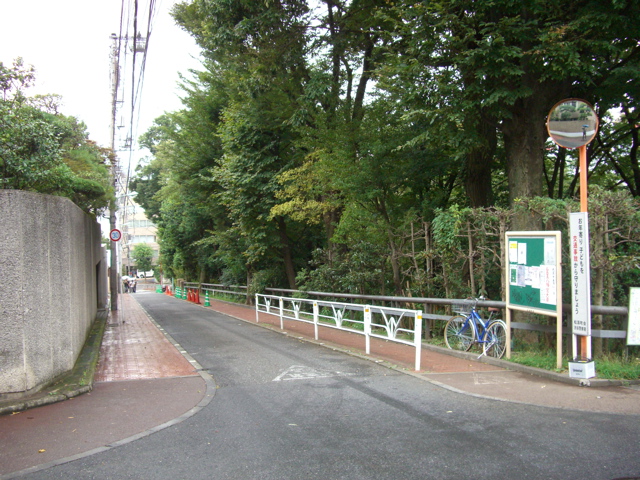 This is a tiny park, just a little west of Shibuya station (central Tokyo — NOT a suburb!). You can see that it is only about 100m long, and maybe 70m wide. Note the Really Narrow Streets with no traffic. This was the first time I’d ever found this park, although I had ventured in the area many times. 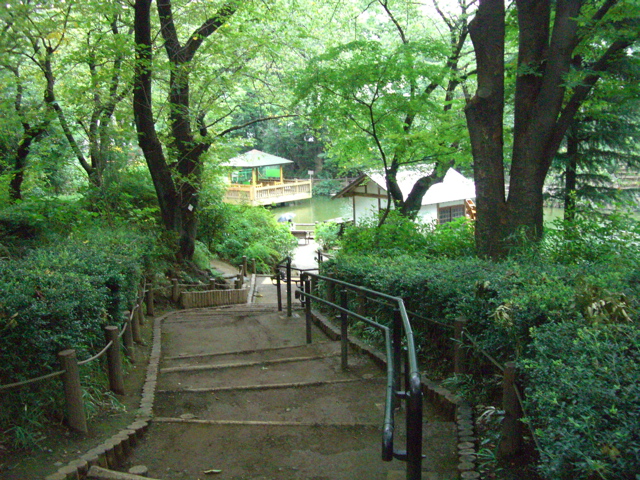 You enter the park… 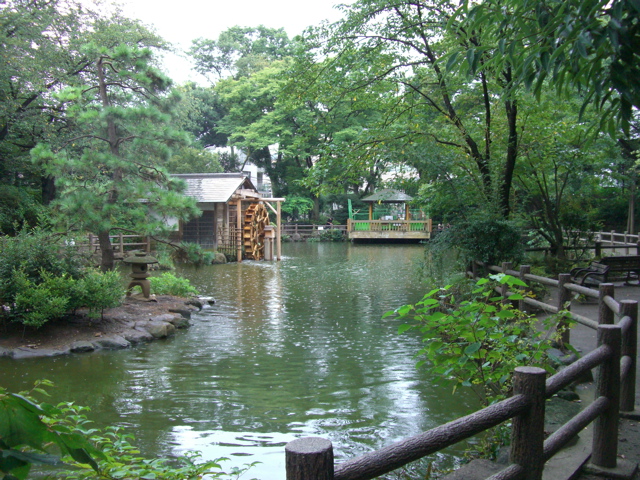 …and there’s a tiny pond complete with waterwheel. Some people fish in parks like these. I don’t think they catch much, but it is probably a nice way to spend the afternoon. 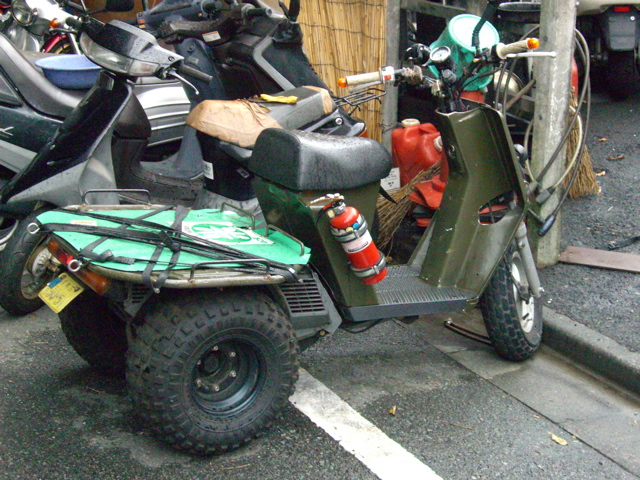 In the category of “just plain weird and wonderful” is this scooter with a fire extinguisher. Somebody’s idea of a cool ride. There is a ton of this sort of funny, creative stuff everywhere. It’s a very artistic, creative environment. 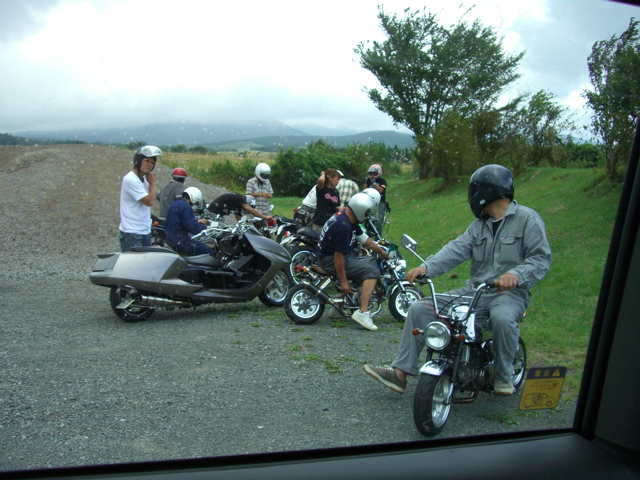 This is a Teeny Motorcycle Club. I’m not joking — that’s what it is. A bunch of guys (and their girls) who say “no, thanks” to the big bikes, of which Japan manufactures millions. They probably have a garage full of big bikes at home. Been there, done that. Anyone with a credit card can buy a big bike. But to ride a teeny bike takes a certain aplomb. Check out the scooter on the left with the low-rider customization. This was in the hills near Mt. Fuji. 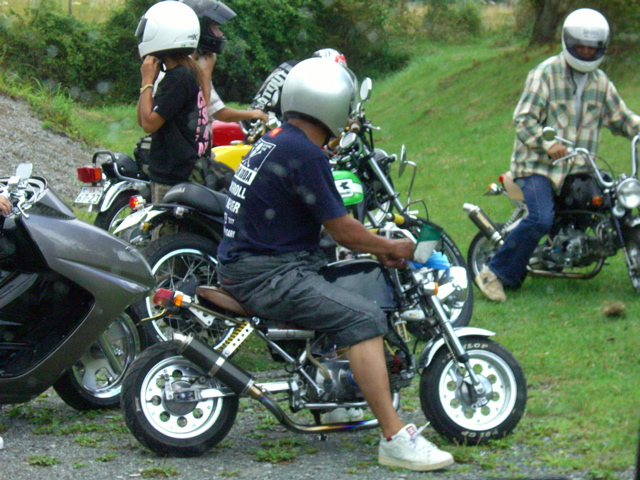 The fellow in the blue shirt appeared to be the club’s leader. He had the teeniest bike. 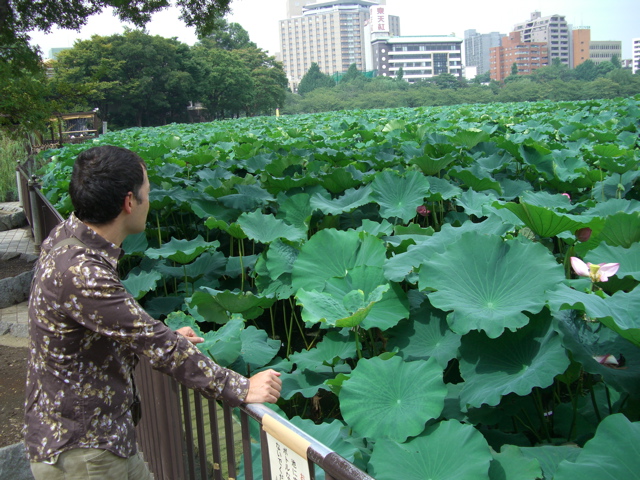 Looking over the lotus flowers at Shinobazu Pond, in Ueno park.

Well, that’s more than enough for today. Can you get a feel of why Tokyo is so fabulous? It all boils down to Really Narrow Streets. Or, that’s the best I can do with three words. I have many more pictures and funny stories. Maybe we’ll post more someday.