(This item originally appeared at Forbes.com on February 27, 2014.)

When you know you don’t really have to pay back the money, you tend to borrow more. When you borrow more, you eventually borrow too much. Then, you print the money to avoid default.

Not a very surprising outcome, is it. And yet, when you look at the implications, it shows yet another avenue by which Mercantilist money (floating currencies) holds within it the seeds of its own destruction.

During this time, the Federal government did occasionally run big deficits, but only in wartime. They knew, at some basic level, that they would have to pay back the money in dollars of unchanging value. This would mean hardship.

Since 1971, I argue that there has been an understanding, perhaps subconscious, that it’s all funny money, and that the “Fed will bail us out” eventually, just as people now expect the Fed to bail us out of virtually every potential problem under the sun. This tips the political scales enough that the spenders become dominant. Governments begin to run chronic deficits, even in peacetime.

You know how hard it is for the Federal government to reduce spending in any way today. Most talk of “spending cuts” is really a reduction in the rate of spending increase. We continually raise the debt ceiling, because … well … because …

And yet, this same U.S. Federal government, with all of its compromises, corruption and deficiencies, enacted huge spending reductions during the gold standard era.

Maybe they understood, somehow, that “you can’t indebt yourself to prosperity.”

Can you even imagine a cutback like that today? But, that is what we did then — even while tax revenues were soaring higher during the “Roaring Twenties,” to $4,013 million in revenue in 1927.

Actually, this pattern has been true not only of the United States, but for governments worldwide. The introduction of Mercantilist floating currencies in 1971 has been correlated to fiscal indiscipline in many countries.

Some very nice research by F.F. Wiley of Cyniconomics.com shows a clear change in government behavior in several developed countries over a 200 year period, from one of fiscal discipline during peacetime, to one of chronic peacetime deficits. This inflection point lands fairly close to the global switch from a gold-based Classical approach to a Mercantilist floating currency environment in 1971. 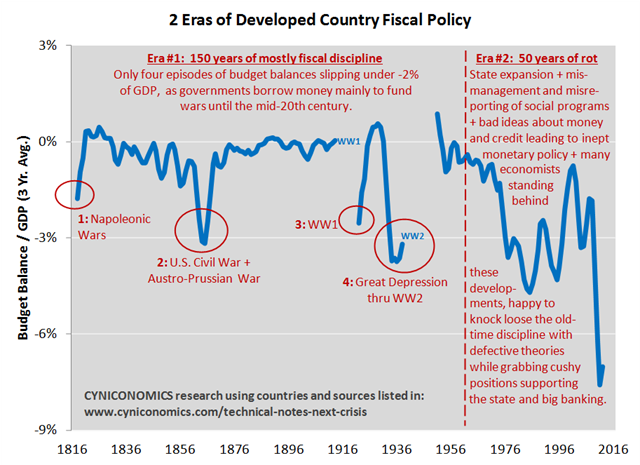 But, this idea holds the core of a larger truth: that monetary discipline tends to lead to fiscal discipline; and that a “let’s just do it because why not” monetary approach leads to the same approach for government finances. Classical money — a gold standard system — indeed leads to a balanced budget in peacetime, in empirical experience.

Maybe the U.S. will be an exception. There is a core of virtue in the U.S. political system, even if it is obscured for now by endless corruption and expediency.