I couldn’t find any decent commentary in support of President Trump’s pardon of Maricopa County, Arizona Sheriff Joe Arpaio. So, I decided to do some research.

Arpaio is certainly a controversial figure, who likes to intentionally stir up contention. He has been accused of all manner of misdeeds. He also won elections every four years, from 1992 until finally losing to Paul Penzone in 2016. At the time of the 2016 election, he had already been charged with contempt of court, and awaited sentencing in October 2017, which might reasonably be expected to interfere with his duties. (He was also, at the time, 84 years old.) The voting public of Maricopa County, who know him best, seemed to be content with Arpaio’s performance up to that point. 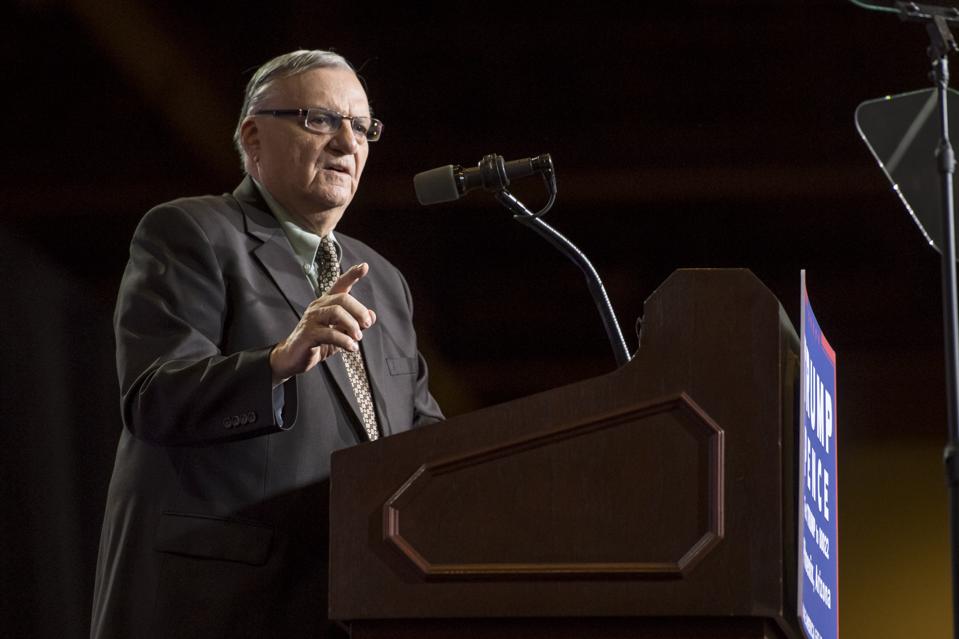 Beginning in 2005, Arpaio began to get aggressive with immigration law enforcement. “Saturation patrols” and “immigration sweeps” targeted Latino neighborhoods and day laborers. Businesses notorious for using illegal immigrant labor were targeted. In this time of “sanctuary cities,” and during the Obama administration, it was perhaps inevitable that many would resent Arpaio’s initiative. He received criticism from the U.S. Department of Justice, U.S. District Courts, Amnesty International, the American Civil Liberties Union, the American Jewish Committee, and the Anti-Defamation League. In 2008, the New York Times called Arpaio “America’s Worst Sheriff.” That year, he won the election for Sheriff with a ten-point lead against the Democratic candidate.

In 2010, he organized a “posse” to help his deputies enforce immigration law. It became a bit of a spectacle when action-adventure stars Steven Seagal, Lou Ferrigno and Peter Lupus joined the group. The Maricopa County Sheriff’s Office claimed that the posse had 3,000 members.

In 2011, a Federal Grand Jury began investigating Arpaio’s office on criminal abuse-of-power allegations. In 2012, the Federal authorities said they were terminating the investigation without bringing any charges against him.

But things got a little more serious in March 2012 – an election year – when Arpaio held a press conference claiming that President Barack Obama’s long-form birth certificate was a forgery. Of course, one does not just say such a thing with no evidence. Arpaio’s investigation involved one of the U.S.’s top forensic document examiners, and a team of European specialists. I looked at the evidence and … it is pretty good. Look for yourself, and make up your own mind. That year, Arpaio won another election for Sheriff of Maricopa County.

In 2007, a Mexican tourist claimed that he had been detained unlawfully for nine hours as a result of “racial profiling.” This claim was picked up by the American Civil Liberties Union, as evidence of a pattern of “racial profiling” by Arpaio’s office. Allegedly, Arpaio’s office was not sufficiently race-neutral in its investigation of illegal immigration along the Mexican border, but singled out Latinos. It is not too hard to imagine how such claims might be made even if Arpaio was meticulous in his attention to racial neutrality; and it is pretty safe to say that he was not meticulous about it, although he did deny these claims.

In 2013, after a six-day bench trial (trial by a judge, instead of a trial by jury) judge G. Murray Snow found the practices of Arpaio and his office discriminatory, in violation of the Fourth and Fourteenth Amendments of the U.S. Constitution.

In March 2014, Snow said that Arpaio “defied and even mocked his order to stop singling out Latinos during routine patrols, traffic stops and workplace raids.” On the day before the 2016 election for Sheriff, the U.S. Department of Justice said that it would prosecute Arpaio for criminal contempt.

Arpaio later complained that the original case (involving the Mexican tourist) was brought by Covington and Burling, where Snow’s brother-in-law was a partner. This produced an illegal conflict of interest. Snow received a waiver from Arpaio’s attorneys, but this waiver itself was illegal, as Federal law prevents any waivers when a family member is involved. Court documents later showed that Snow’s wife told a friend that the judge “hates” Arpaio and “will do anything to get [Arpaio] out of office.”

Some noted that the DOJ limited potential jail time to six months – the maximum length of time that the Supreme Court has held that does not require a jury trial. As a result, the trial was held by a Federal judge, instead of a jury drawn from the Arizona county that had voted him into office for twenty-six years.

“I sat through three days of testimony and it was clear from the beginning that the DOJ had no evidence to make their case.  In fact, all of the DOJ’s witnesses made it clear that Judge Snow’s order was unclear and ambiguous. There is no way a jury would have determined that the Sheriff willfully and intentionally violated the judge’s order.”

Eventually, Snow was forced to recuse himself. In July 2017, Arpaio was found guilty of criminal contempt of court by Clinton-appointed judge Susan Bolton, and was scheduled to be sentenced in October 2017.

In other words, a judge whose wife said he “hates” Arpaio, without a jury trial, claimed that Arpaio – having made a lot of enemies after claiming that President Barack Obama forged his birth certificate, and showing a lot of evidence in public in support of his claims — was “racially profiling” Latinos in his enforcement of illegal immigration laws along the Mexican border. Then another judge – without any jury trial — then later claimed that Arpaio continued to “racially profile” Latinos after orders to desist.